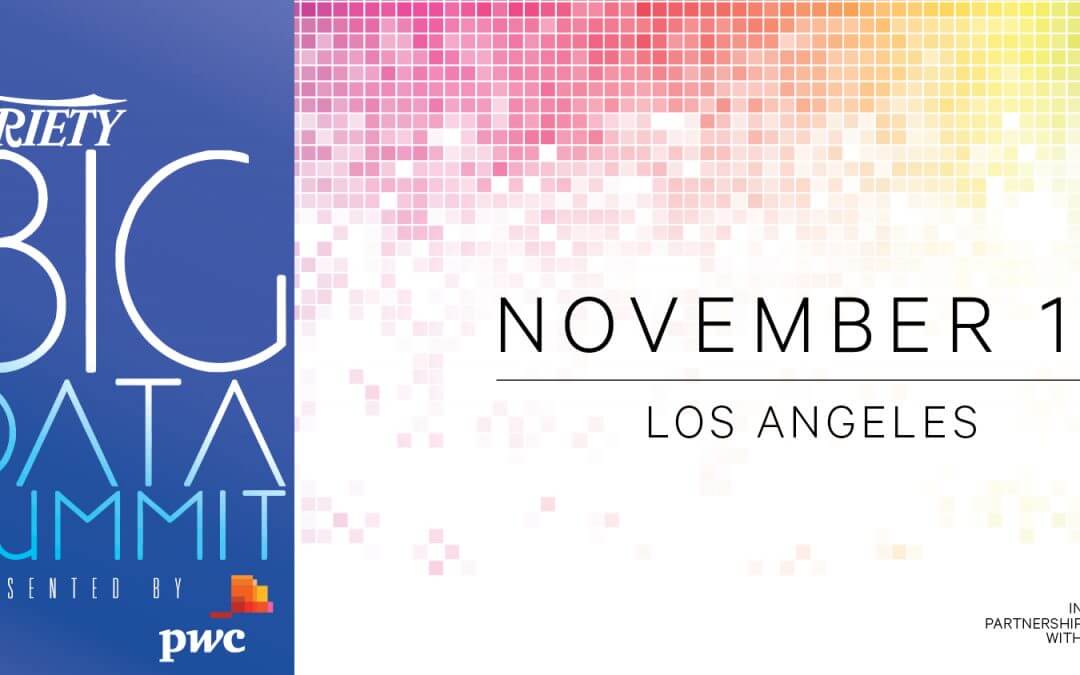 Attending the Variety Big Data Summit for three years in a row now has always been a rewarding and insightful endeavor for me. My understanding of the data landscape in entertainment, and really business in general, has grown exponentially over the years I’ve worked in business development for a data integration and business intelligence consultancy. What I’ve come to realize over the years is that I’ve witnessed the rise of a concept that really had already existed for a very long time: Big Data. I’ve seen the widespread adoption and use of Big Data (or at least the hope to be using it someday, in some cases). Reflecting on the things I learned at this last Summit earlier this month, it occurred to me that the ubiquity of Big Data is here, finally! Or has it always been here? OK, let’s explore what I mean.

Taking a look at the topics discussed at the day-long event is reminiscent of any collegiate marketing or business major’s syllabus for a given semester: “Explore data’s growing impact on media and entertainment spanning content creation, audience measurement, monetization, marketing, asset management and more.” Subtract the overall look at entertainment specifically, and what you have here is a study in data (information) for the purpose of creating, measuring, monetizing, marketing, and managing your business. Whatever business you are in, you either do these things better than your competition, or you fail. The deeper dive panel discussions at Summit were a good reminder that data is challenging the way business has been done in the past. We looked at important topics such as Reaching a Global Audience, Engaging Relevant Audiences, People-Based Marketing, Sports & Data, Privacy & Security, The New Video Economy, Data Science, and Data & Creativity. All topics that have profound effect on the entertainment and media business, and most should be equally as important to non-entertainment verticals. Data is ubiquitous and we’ve been collecting it for years. The sense I have is that businesses are just now beginning to realize the benefits of what we’ve been talking about since the inception of the Big Data movement, and going forward this journey will never really end.

One of the panel discussions at Summit struck me as a very important commentary on the benefits of using data to drive demand, engagement, and understanding of the customer journey: The Rise of People-Based Marketing. This topic is new only in the sense that we are beginning to bring all of the pieces of the puzzle together in marketing, and some new pieces of that puzzle have emerged. I liked what Sean Moran, Head of Marketing & Partner Solutions, at Viacom had to say regarding this: “It’s cliché to say that we’re in a more evolved state in marketing than ever in our history. We’ve talked about it for a long time, but before now it was never actualized. Such rapid exchange and pace of what data can be captured during a behavior revolution. It’s all coming together. We’re connecting in a targeted way in which the ability to get targeting and predictability at scale in TV and extending it to other platforms, so you can predict the consumer’s behavior by fusing data together through viewing, geo-location as well as purchase intent. Emotional connection plays into this as well. The excellence of data can only take you so far, you have to understand the emotional connection of consumers. Some are jumping on that, others see data as a way of sourcing up the currency that’s been happening since 50 years ago.” So, in theory, the ability to collect data and the ever increasing data points that are collectible are truly giving companies the opportunity to tap into the consumers’ emotional state at the most critical points along the customer journey. We might predict what the consumer is feeling before they realize what they are feeling. However, and to counterpoint this concept, I also liked what Andrew Appel, President and CEO at IRI had to say with regard to the fragmentation of all these data points: “Yet nobody really has the capability to do that (use the data with a level of sophistication), so while the fragmentation is exploding, the ability to get all those different data sets into one place (shopper data, media data, consumer data, context data, purchase intent, television viewing habits, exposure to advertising, etc.) at an individual level to effectively score each and every consumer in real time, on what will drive their behavior change, what you should use to target them, and ultimately measure whether or not it changed their behavior, is ever more difficult.” While I agree with Andrew that it is ever more difficult, I also believe companies are getting savvier at doing these things, and thus the journey to marketing analytics nirvana continues.

It wouldn’t be right for me to finish my post without talking about Mobile. Mobile in the sense that everyone is connected, everywhere they go, regardless of the device at the crux of the matter. This represents a very intriguing opportunity for businesses, and I suspect it will only continue to grow ever more intriguing as we get better at things like attribution, segmentation and personalization, and as technologies like VR begin to take hold. On that, I agree with Eric Smith, Industry Manager, US Entertainment, at Facebook, who said: “Facebook has embraced mobile for consumers. For consumers it is known that 1 out of 5 Mobile minutes spent is either on Facebook or Instagram. Facebook has a very personal connection with people as it creates 1.8 billion personalized experiences for people every month given their active user base. Mobile is one of the key doorways to personalization. These are big numbers, but that is how you get to scale. The scale of personalization. A couple of things Facebook has worked hard at are; a strategy that they’ve built for their Partners called Test Learn and Act, where we understand who was interested in their content or the game. A great example is with Ubisoft on a game they are launching in the Tom Clancy series. We understood with them that there are three really important segments within their user base (Why people want to purchase and play their games): there’s a group that’s really interested in the technology and strategy and gadgets and gizmos, there’s a group that is really into the adrenaline and competition, and there’s a group that’s just really fascinated by the open world play where they can go and explore a universe that is unlike the one we live in in real-time. So Facebook worked with Ubisoft to understand these audiences and then to build a creative doorway; a 5-second bit of content that they laid on top of the trailer for their game that really appealed to those segments. We showed a lot of the tech, gadgets and gizmos to that audience, and so forth. We saw 63% increase in Purchase Intent, amongst those audiences by properly segmenting and then speaking to them in the right creative language – we’ve applied that to movies as well. Sony (where Eric used to work) is now a client of Facebook’s. Working together on the Sony film: Money Monster, using this same strategy, they found that men 25 to 34, an audience they hadn’t expected to be interested, but very much was. So Facebook worked with Sony again to help create some creative that spoke to that audience, targeting clusters that would reach those men, 25 to 34. As a result, they found in the exit poles there was a strong demographic of them that actually went to the film. This is the Intersection of the Content and Mobile Marketing Personalization experience.” Well said, Eric. None of which could be done without the proper collection of data, not just from mobile, but from all of the other myriad places we are able to pull from, and those are only growing exponentially with new platforms, technologies, and ways to consume content. Each new form is representative of a whole new world of available data points around the customer journey: The Ubiquity of Data in All Things!

In conclusion I’d like to say that the Variety Big Data Summit 2016 was a relevant and successful event, as it has been in past years. I’d recommend anyone working in Entertainment, or in a business that is striving to be more Data Driven to attend. I’d also say that the attendees at this event each year prove to be highly engaged, many thought leaders in their own right, and thus the networking is a blast. From a “Big Data” perspective, it is clear to me that the use of data for all things in business has a very broad surface, which has only been slightly scratched. It’s an exciting time for marketers, content creators, and businesses who have honed a skill around experimenting with, and utilizing data in new and innovative ways. Now, can we get back to referring to the practice of collecting and harnessing data as something other than “Big Data”? Perhaps we just go back to calling it, regular old, good old-fashioned, DATA.